The Funny Kid in Town! 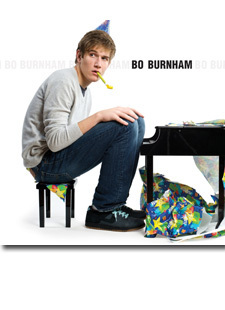 What would happen if you took an 18-year old fresh out of high school, gave them a keyboard and a guitar, and told them to perform stand- up? Well, hilarity would ensue if that person being discussed was Bo Burnham.

Even before becoming the youngest person ever to record a Comedy Central Presents Special, Burnham had made a name for himself on websites like YouTube and Break.com. It was those videos that snagged him nation-wide notoriety for his songwriting as well as a four record deals from Comedy Central Records.

He has even been selected by Judd Apatow to work on the soundtrack to a High School Musical style comedy. A perfect mash up of a show tunes type of sound and politically incorrect satire puts Bo Burnham ahead of the pack in this new breed of alternative comedy that's hitting the clubs. Whether he's singing about his family's questioning of his sexual preference, explaining how Hellen Keller was the perfect woman, or spitting nonsensical raps filled with puns, Burnham puts the audience in quite a pickle because they have to choose between non-stop laughter or singing along.

Even during breaks in his songs, his well-timed facial expressions keep the audience from taking a much-needed breath. Upon seeing his special on Comedy Central for the first time, I decided I had to go out and buy his album. The audio tracks are amazing, but to get the full effect you must watch the included DVD of his stand up that also contains bonus clips of his online videos. If you like stand up, or even comedy in general go get this album. Not just because it's funny, but because he's Bo-Yo.