Bruce Springsteen: Working on a Dream 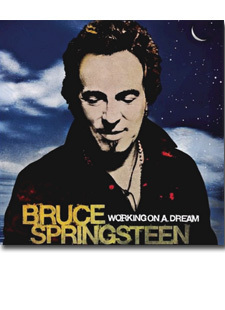 There are many phases of Bruce Springsteen's career:

In between there was Tom Joad-Bruce and Seger Sessions-Bruce. The latest album from The Boss could be the start of a new phase known as Happy-Bruce. "Working On A Dream" has the feel of a satisfied man who sings songs of love, hope and content.

This is Bruce's third full album with the E-Street Band since 2002's "The Rising". It comes off the heels of 2007's "Magic" and was conceived at various times in between shows from the tour. As a whole, the album flows nicely and has one, maybe two songs that could be considered as filler. Clarence's sax, which has been a staple on E Street, makes a very small contribution to these new songs. However, Bruce did not just mail this one in. His heart and soul is all over this record.

The CD leads off with "Outlaw Pete", which clocks in at 8 minutes. It's his longest E Street effort since "Drive All Night" from 1980's "The River". It's a bit lengthy, but you find yourself pulling for "Pete" the same way you pulled for the Magic Rat. Picture "Outlaw Pete" as a late Nineteenth Century "Jungleland". It's not quite as majestic, but the story telling is all Bruce.

"My Lucky Day", the only new song that has the classic E-Street sound with piano, guitar & sax, is a positive love song. You can also hear a faint back up/sing-a-long with Miami Steve, almost reminiscent of "Two Hearts" again, from the aforementioned "The River".

The title track is a constant uplifting thought that the dream will eventually come. Even though there is the possibility of failure, the singer's attitude is that of hope, where as the pleasantly sounding "Queen Of The Super Market" has the voice of a man who is too shy to tell the woman he loves his true feelings, but is happy just to catch a glimpse of her face.

"The Last Carnival" is a sequel to "Wild Billy". Circus Story, from the album "The Wild, The Innocent and The E Street Shuffle" and also appears to be a tribute to the late organist, Danny Federici, who died of cancer in 2008. Although he was not identified as Wild Billy, Federici was known to be the most outlandish member of E Street nation back in the 70's and 80's. "The Last Carnival" has the character having dropped his "Wild" moniker and is clearly not moving on with the show. Bruce shows his love for his fallen comrade, but as the lyrics mention, "the train keeps on moving" the band will inevitably play on.

Some of Bruce's influences can be easily heard from Bluegrass & Country ("Outlaw Pete", "Good Eye", "Tomorrow Never Knows") to late 60's rock-specifically the Byrds ("Kingdom Of Days, "Surprise, Surprise").There are also some that sound as if they came straight from the "Magic"

Where ever these new gems were created from, make no mistake, they are gems. Where Bruce used to sing about love lost and desperation, this collection of songs is a wonderfully positive collection of happiness. Bruce doesn't need to work on his dream. He's already got it and this Summer he will share it throughout North America and Europe.