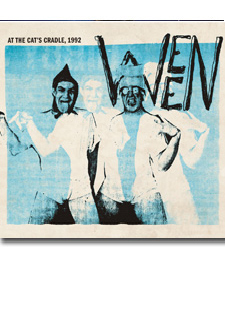 Let me start off by saying that WEEN are geniuses and this rare live recording from 1992 proves it. Recorded live at the Cat's Cradle in Chapel Hill, NC, this set captures the early touring incarnation of just Dean and Gene Ween along with their trusty Yamaha Digital Audio Tape Deck to protect the beat on bass and drums.

Fans of early stage WEEN will be brought back to a time and place when they were first honing their twisted act while on the road in support of their major label debut for Elektra records, Pure Guava.

At a time in their career when many thought their act was too weird to go beyond cult status, WEEN persevered with their unique brand of humor and undeniable talent. It was that perseverance over the course of their career that has since won over a great many to their brand of bizarro pop. Tracks from this live set include staples like "Pork Roll Egg And Cheese", "Never Squeal On Th' Pusher" and "Captain Fantasy". The guys were also not afraid to go purely primitive with renditions of "Cover It With Gas And Set It On Fire" and "You Fucked Up".

The flow of the CD suffers a little with the limitations they had of working with a DAT machine instead of an actual live band to back them up. Some of the banter between the duo and with the audience provides fans new to WEEN what their early shows were really like.

Since getting their start in New Hope, Pennsylvania back in 1984, nobody has even come close to WEEN in mastering the art of combining the hilarious with the truly disturbing and in many cases putting it to wonderful music. This late '92 set shows they were still a tad green, but certainly beginning to expand in more interesting directions. This CD also comes with a DVD of 17 live performances from late 1991 and early 1992 while in the Netherlands, Trenton, NJ and Columbus, OH